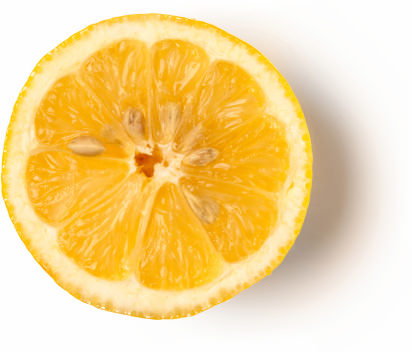 The origin of lemon is not known, but it can be found growing in Asia and East India and Italy. We use organic Sicilian lemons, wherever possible, and buy these from our supplier in Sicily.

Its flowers are white and pink-tinged and strongly perfumed, which become the lemon fruit.

The word lemon stems from the Arabic, ‘laymun’ and the Persian, ‘limun.’

Under the right conditions, a lemon tree can blossom every month and produce thousands of fruits per year.

Around the 11th century, crusaders from the East brought lemons to northern Europe. Columbus then firmly introduced the fruit into the western hemisphere.

Lemon trees were planted in Florida when the Spanish settled there in the 1560s; two hundred years later, the Franciscan Fathers took seeds from Mexico to California, and today, most of the world’s commercial lemon production is concentrated in Italy, Sicily and California.

We have added organic lemon peel as a beautiful decoration to some of our finest products. Our Sexy Peel soap, inspired by breakfast marmalade, contains organic lemon peel in its top layers for interesting texture, visual impact and gentle exfoliation.

Organic Lemon Peel can be found in these products